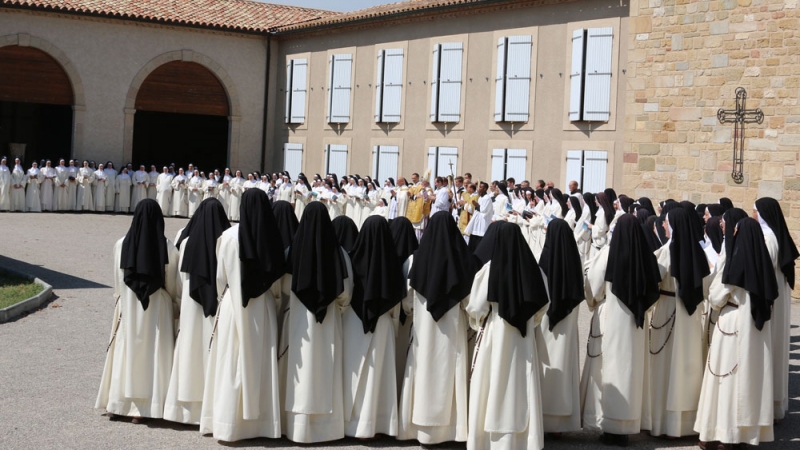 She hath chosen the best part

The same causes produce the same effects: a good tree produces good fruits, a bad tree produces bad fruits. Thus, Holy Mass - the offering of the ‘Blood that germinates virgins’ - this good tree, has always been a source of vocations, these good fruits.

By attacking the doctrine of good works, logically Luther came to attack the work par excellence, i.e., the Holy Mass, which by its sacrificial nature is the inspiration of all good works. Among these, in a writing of 1521 Luther particularly attacked the monastic vows (which he himself had pronounced), rejecting the distinction between the monks and the rest of the baptized, trying to demonstrate that the three monastic vows are opposed to the freedom of the gospel. His pamphlet had devastating effects, emptying many convents in Germany and elsewhere. He himself put his doctrine into practice by marrying Catherine de Bora in 1525, whom he had helped out of her convent two years before with eight other nuns.

At the same time, Providence raised a powerful antidote to this Protestant spirit: St. Ignatius of Loyola with his Spiritual Exercises and his Society of Jesus. It was indeed a gigantic struggle between Two Standards, a struggle of two mentalities. To come to the precise point which concerns us here, in his Rules to think with the Church, two of them concern the religious life, aimed at the errors of Luther:

It is not surprising then, 450 years later with the neo-Protestant liturgical reform of the 1960s that touched on the nature of the holy sacrifice of the Mass and thus on the spirit of sacrifice that ensues, that there would be serious consequences concerning priestly and religious vocations. Alas, it showed up immediately.

Barely a year after the closure of the Council, Archbishop Lefebvre, in his letter to Cardinal Ottaviani, made a painful observation of this aggiornamento, of “the difficulty (that many have) to grasp these errors that are spread everywhere; the evil is located mainly in a literature which confuses the minds with ambiguous descriptions, equivocal, but under which one discovers a new religion”. Now, among the fundamental points of the traditional doctrine now shaken, he gives first:

The fifty years that followed only confirmed the judgment of the great missionary. Here in Quebec, most religious communities have had no vocations for 25, 30 years, and are dying one after the other.

While we need more than ever a Saint Benedict and a Saint Therese of Lisieux, these contemplatives who changed the history of the world, how sad it is to note that Pope Francis, in some of his acts, continue this shaking of religious life, and precisely that of the contemplatives, so necessary to the life of the Church. The latter, following her Divine Master has always taught the priority of the contemplative life on the active life. “Mary hath chosen the best part” (Luke 10:42).

In his exhortation Gaudete and Exsultate of March 19, 2018 on the call to holiness in the present world, while praising “contemplation also (necessary) within the action”, i.e., in traditional terms, “the soul of the apostolate”, the role of Martha, he explicitly discourages the purely contemplative, cloistered life, the part of Mary, yet that preferred by Our Lord. “It is not healthy to love silence while fleeing interaction with others, to want peace and quiet while avoiding activity, to seek prayer while disdaining service” (26) as if what immediately arose from the love of God was less meritorious than the love of neighbor. Yet St Thomas clearly teaches “that which pertains more directly to the love of God is generically more meritorious than that which pertains directly to the love of our neighbor for God's sake” (2a2ae, Q. 182, a 2).

A little further on in his text, the Pope continues in the same direction, as if to devote oneself to one’s own sanctification for the love of God, which is in fact the goal of all religious congregations, was Pelagianism, “a self-centred and elitist complacency, bereft of true love", which manifests itself in “a punctilious concern for the Church’s liturgy, doctrine and prestige” (n.57). And he adds: “Not infrequently, contrary to the promptings of the Spirit, the life of the Church can become a museum piece or the possession of a select few. This can occur when some groups of Christians give excessive importance to certain rules, customs or ways of acting” (n.58). And here is the key to this new conception of religious life, especially contemplative: “to find in the treasury of the Church whatever is most fruitful for the “today” of salvation. It is not a matter of applying rules or repeating what was done in the past…” (n.173) This is modernism in religious life: we have to adapt to the present time in all things.

But who can tell us what is today “most fruitful” than yesterday? Do we not see in half a century the bad fruits of the conciliar reforms in religious life? What would the saintly founders of the great religious orders that have borne so many centuries-old fruits say about all this?

Our fight for Holy Mass therefore intimately includes a struggle for religious life, an integral and necessary part of the Church's note of holiness. This is what Pope Pius XII said specifically to parents shortly before the Council in his encyclical on Sacred Virginity (which you can find here https://sspx.ca):

Moreover, as the obligation of Our Apostolic Office demands, We urge fathers and mothers to willingly offer to the service of God those of their children who are called to it. But if this be a source of trouble, sorrow or regret, let them seriously meditate upon the admonition which Ambrose gave to the mothers of Milan. ‘The majority of the young women whom I knew wanted to be virgins were forbidden to leave by their mothers. . . If your daughters want to love a man, the laws allow them to choose whom they will. But those who have a right to choose a man, have no right to choose God?”

Let parents consider what a great honor it is to see their son elevated to the priesthood, or their daughter consecrate her virginity to her Divine Spouse. In regard to consecrated virgins, the Bishop of Milan writes, ‘You have heard, parents, that a virgin is a gift of God, the oblation of parents, the priesthood of chastity. The virgin is a mother’s victim, by whose daily sacrifice divine anger is appeased.’

In this month of the Most Blessed Virgin Mary, let us not forget vocations in our daily prayers, let us speak with admiration to young people whenever an opportunity arises, such as one entering the convent or the seminary, an ordination or a profession. Let us pray the Lord of the harvest for our eight Canadian seminarians in formation, for many others to follow them, and for the brothers and sisters as well.