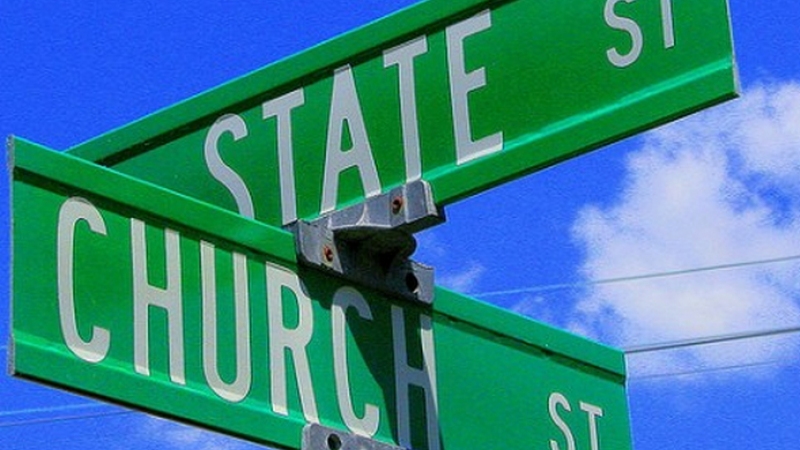 Throughout Canada over the past year, governments have made laws restricting and forbidding the attendance of Catholics at Mass and of non-Catholics at their various worships.

Do they have the right? Although what I am going to say is certainly a modern heresy, I will say nonetheless that it depends whether the religion on which the government is imposing its law is the true one or not. If a religion is false – either because the adherents worship a false god, or because they worship the true God in a false way – the civil authority does indeed have the right to control, limit or even abolish these worships in accordance with political prudence. When it comes to the true religion, however – that is, the one true Church established by the divine Saviour Himself – the State has no such power for the simple reason that the goal of the Church surpasses the goal of the State by the same measure that Heaven surpasses the Earth.

Let me explain. Both the State and the Church are perfect societies. A society is where a group of people co-ordinate to seek a common goal. Walmart, for instance, is a society; all of Walmart’s members co-ordinate to seek the greatest possible profit for its owners. But Walmart is an artificial society, that is, one made by man – likewise, Canadian Tire, Calgary Golf club and the Toronto Maple Leafs. Now there are three societies that are not artificial, but are made by God: two are natural (the family and the state) and one is supernatural (the Catholic Church, which is the Body of Christ); two are perfect (the Church and the State) and one is imperfect (the family). Note carefully here that perfect means “lacking nothing to achieve its goal” and that imperfect does not mean that the family is lacking something it should have (like you could say of the Maple Leafs) but rather that the family was designed by God to be insufficient on its own because one family needs other families – the family of families that is the Nation, and the supernatural family whose father is Our Father, and whose mother is Mary.

The goal of the State, being temporal (that is, for this world), is called the common good. And the common good is peace. Now peace does not mean the absence of conflict, but rather the tranquility of order. Order is when everyone is in his place; this is the work of justice. When every man gives both to God and his neighbour their due, we have peace. The goal of the Church is eternal life, which is the very goal of man.  Peace helps man to achieve his ultimate goal.

How do these two work together? As every Catholic belongs to these two societies, there must be some sort of co-ordination between the two. If I were a member of a football club and of the fire brigade, what should I do? Leave fighting the fire to play football or vice versa? The fire brigade should not tell me how to play football, and the football club should not tell me how to fight fires; but when a fire breaks out at match time, I should take off my cleats and pull on my helmet. In a similar way, the Church should not tell the State how to make rules for the road, and the State should not tell the Church whether it can or cannot have public Mass. And when the State decides that a deadly pandemic requires everyone to stay at home, it has to remember that its goal is temporal (health) and thus subordinate to the eternal goal. Therefore, it does not have the authority to forbid Mass or to forbid the faithful from attending Mass. Furthermore, the right of the faithful to attend Mass doesn’t come for the State; it comes from God. How, then, can the State take it away?

Having said all that, we should not be surprised that the modern State would put temporal concerns over the eternal one, nor should we be perturbed as if this disorder were going to stop us from working out the only thing that matters – our eternal salvation.

The modern State refuses to recognise God, therefore it takes on the role of God Himself.  This denial of God by the State and the pretense that there are no rights which do not come from the State has a technical name, it is called totalitarianism. Totalitarians may be National Socialists or Red Bolsheviks, or they may be hard-hearted and sentimental liberals who wish to save lives by wearing a mask as they hand out the morning-after pill; but they all have this in common: they are atheistic (in rebellion against God), they are materialistic (the soul doesn’t exist and doesn’t matter – we are just animals), and they are authoritarian. How could it be otherwise?  In the Gulag Archipelago, Solzhenitsyn writes: “Power is a poison well known for thousands of years. But to the human being who has faith in some force that holds dominion over all of us, and who is therefore conscious of his own limitations, power is not necessarily fatal. For those, whoever, who are unaware of any higher sphere, it is a deadly poison, for them there is no antidote.” Just as the man who denies God and perseveringly chooses mortal sin is condemned to utter destruction by making himself his god, so also the family and the nation who place their salvation in bodily health, a vaccine, wealth, or any other false God. We would do well to meditate often on the whole of the seventy-second psalm. “For behold they that go far from thee shall perish.” (Ps. 72, 27)

This apostasy from God explains why the modern State arrogates for itself the right of life and death over innocent babies and old people, why it turns the wine of marriage into water, and why it recognises no right except those it grants itself. Dictating to the Church how it may worship God is simply a consequence of its false ideology.

But Catholics must not be downhearted in the slightest. The soul in the state of sanctifying grace is the darling child of God, to whom nothing is allowed to happen unless it be for his good. This is the explicit teaching of Truth Itself: “And we know that to them that love God, all things work together unto good.” (Rom. 8, 28) When a totalitarian power reacting in a totalitarian way to what is in the pagan worldview the worst possible danger – death when we have yet to exhaust the dregs of material pleasure – decrees that we are not able to worship God freely – which is the very purpose of our existence – we are simply sharing in the cross that so many of our ancestors have borne throughout all time. It is Pilate asking, “what is truth?” and then washing his hands as he condemns God. But God who allows it is operating his great purpose – detaching us from this world so as to attach us to Him.