April 2021 - District Superior's Letter: “in his image and likeness.” 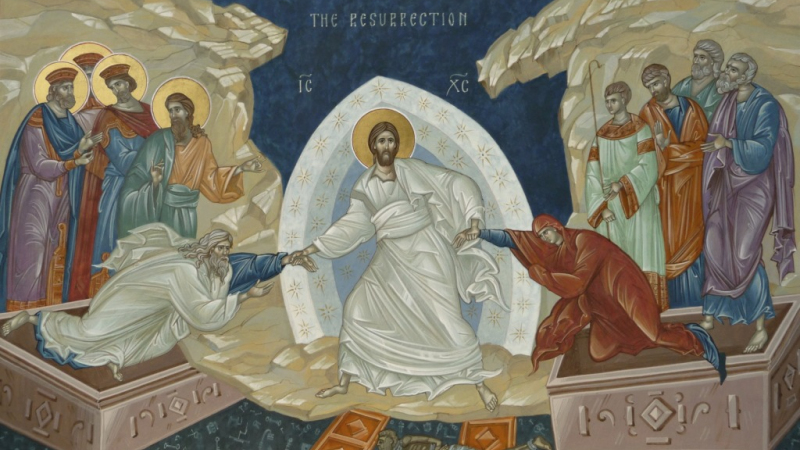 God is the life of our soul.

On the afternoon of Easter Sunday, Our Lord Jesus Christ, risen from the dead visited the ten apostles in the upper room and said to them: “Peace be to you. And when he had said this, he shewed them his hands and his side. The disciples therefore were glad, when they saw the Lord. He said therefore to them again: Peace be to you. As the Father hath sent me, I also send you. When he had said this, he breathed on them; and he said to them: Receive ye the Holy Ghost. Whose sins you shall forgive, they are forgiven them; and whose sins you shall retain, they are retained.” (Jn. 20, 19-23) This is the result of the life and death of our Saviour who is God Himself – the forgiveness of sin. Our Lord Jesus Christ came on this earth not to destroy climate change or social inequality, but to destroy death and to restore man to everlasting life.

You see, in the beginning, God created man different from all the other things he had created on the first six days. The difference was that He made Him “in his image and likeness.” (Gen. 1, 26) “In His image” means that man has an immortal soul. Animals do not have immortal souls, they just have instincts. Animals don’t invent new ways of travelling or heating or air-conditioning their nests or burrows; but man does because he can think. Animals love by instinct only, but a woman can love a criminal son or husband.

“In His resemblance” is a whole other level. This is sanctifying grace. ‘Grace’ is a free gift, ‘sanctifying’ means to make holy, and to be ‘holy’ means to be like God. Imagine that you had a dog and a magic wand. The dog, being doggy, is incapable of sharing your life at more than a basic level: you can pet him, have him lick you and listen to his barking, but when you explain to him your thoughts on the “Black Lives Matter” movement, he appears to be uncomprehending; his knowledge of the theorem of Pythagoras is negligible; and even if you could bring him to the opera, he wouldn’t be able to follow the plot. More than this, he will die long before you and that will be the end of your relationship. However, a stroke of your wand, and presto, he can think and speak just like you; another stroke of your wand and he can live as long as you can.

God created us His darling children. But we are human, not divine, therefore we simply cannot understand and love on the divine plane. A stroke of the “divine wand” and we have sanctifying grace, which makes us share the divine life; another stroke and we have the preternatural gifts, immortality by which we can live as long as God does – that is to say forever. But there is a potential snag: because we are intellectual, we can guide ourselves; and if we can guide ourselves, we have free will.

The reason that I made my pooch long-living was because he could now share my life. If he chooses to reject this, he forfeits everything else too. If I were become a citizen of Vanuatu, I would receive the privileges of the natural-born sons of that glorious archipelago; but if I betray my adopted nation, I will lose my privileges also.

Learn this o man who desire to be free from suffering and from death: The root of bodily death is the death of the soul; the cause of the death of the soul is sin. The Saviour of the World comes into the supper room breathing and declaring the good news, the best news in fact that the world has ever heard: “whose sins you forgive, they are forgiven.” What does this mean? It means the end of suffering and death, because the root of death being destroyed, the trunk and branches of death will decay and die too. Jesus Christ has destroyed death on the cross and administers to all who believe the antidote by Baptism and Absolution. I have become part of His Body; if I follow Him to Calvary, I will also follow Him to Easter; and I too will rise on that day in my own flesh, glorious and immortal, never more to die.